In fact, ear picking is a professional term, which means digging out the ears. It originated in the folk, but was carried forward in the court. Unlike folk ear picking tools, which are simple, an ear pick is everything. The simpler the tool, the greater the risk. After all, ear picking is a blind exercise, accidentally hurting the internal structure of the ear. Cause hearing loss. In order to solve this problem, bebird has recently crowdfunded and launched a wireless smart visual ear wax removal bebird Note3 with the help of science and technology, which makes the ears visible and helps us reduce the damage to the ears. I also had the honor to experience this product in advance, and I will share it with you today. 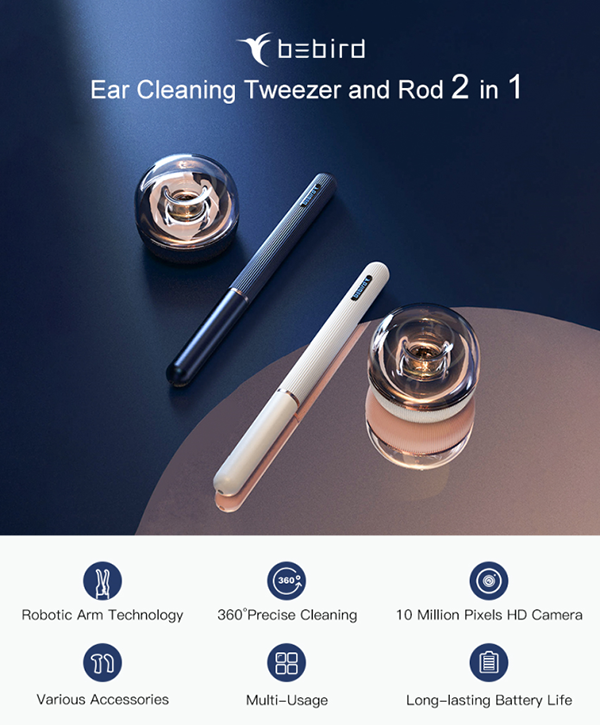 bebird is a brand that focuses on visual ear cleaning. Up to now, there are as many as 7 ear pick products, and the latest one is today's protagonist bebird Note3 intelligent visual ear wax removal.

The bebird Note3 intelligent visual ear wax removal stick pays great attention to quality, and even the packaging is not overlooked. It is made of pure white hard paper shell. There is only a rendering of the ear wax removal on the front of the package. There is no brand and no product name. It is compromised for the beauty of the product. Yu gave up the brand display, although there are not many such brands, but each one is worthy of respect.

The back is the basic product parameters. It can be known that the charging power of the bebird Note3 smart visual ear wax removal is 5V/1A, and the working power is also 5w. The one in my hand is the star blue color. This time, the bebird Note3 is in addition to the star Blue and Haoyue white color.

The packaging is very rich in accessories. First of all, there is a long strip of instructions the same size as the packaging box. The interior is full of pictures to ensure that this product can be easily controlled even if it is the first time to use this kind of product. 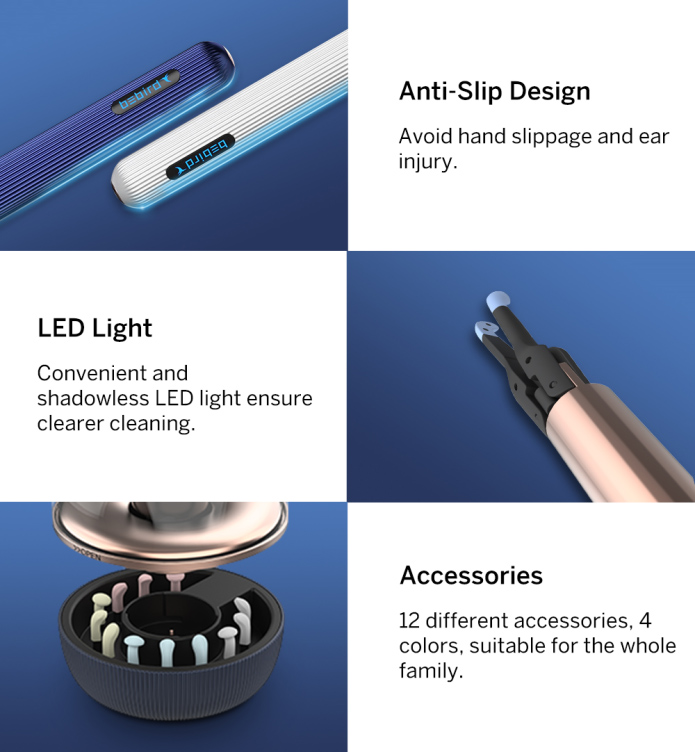 The base storage bin is also roughly divided into upper and lower parts, the upper part is made of transparent material, and there is a gap similar to a duct in the middle, which is used to fix the ear picking rod.

There are two electrodes at the bottom, which can be charged directly when the ear wax removal is plugged in.

The 4 types of ear picks are classic elastic ear picks (4 pieces), which are characterized by smoothing the force and not hurt the ears; pick out special ear picks (4 pieces), which have the characteristic of cleaning earwax and penetrating the inner ear. Digging hidden dead corners; curved neck ring eartips (4), which are featured for easy scraping, higher curvature, and professionally remove stubborn earwax. It can be seen that there are 4 eartips of each type, and this design is just enough to satisfy a family of four, so that they do not mix.

The overall shape of the ear picking rod is more like a high-end fountain pen, the size is φ14*162.8mm, and the whole is also divided into two parts. The upper part is a dust cover with a fine frosting process; the lower part is the stripe process on the surface of the base storage bin. the same.

There is a rose gold decorative ring in the middle of the upper and lower parts, which looks very textured as a whole.

There is a "bebird" logo on one end of the ear wax removal. Remove the magnetic dust cover and the ear wax removal will automatically turn on. At the same time, the brand logo will be lit. The light blue light is not only for beautification, but also Can play the role of working indicator.

The two copper charging contacts on the ear pick are located at the bottom. When one end of the metal contact is inserted into the storage compartment of the base, it will enter the charging state. At this time, the "bebird" Logo displays red, indicating that it is charging. Unplug it to boot. When we do not need to charge, we can put the ear wax removal upside down into the base storage bin to play a fixed storage role.

Unplug the dust cover on the ear wax removal to see the internal structure. A small blue ear pick has been installed in front of the ear pick. Down the ear pick is a light strip composed of 4 LED lights, which can be used for dark environments such as the ear canal. Provide enough light, the light belt is a 1000w high-precision endoscope, through which a clear picture can be obtained. 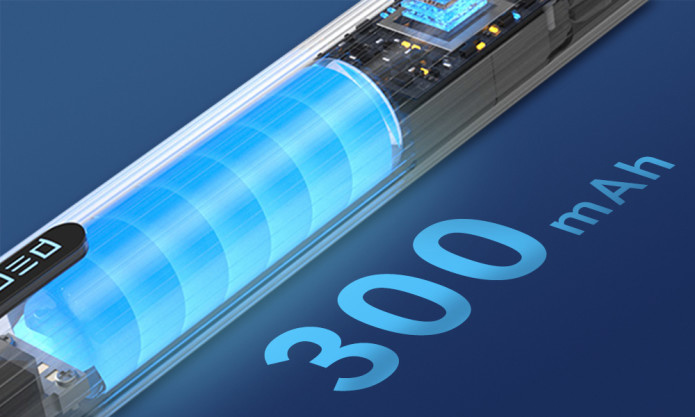 The ear wax removal is actually a multi-purpose machine. After the ear pick is manually removed, the tip of the ear wax removal instantly becomes a small tweezers. After turning on the visual ear picking tweezers, you can remove the ears without touching the immature ear wall. Inside foreign body.

In order to truly see the microscopic world in the ear, the bebird Note3 wireless intelligent visual ear wax removal is equipped with a 10 million high-precision endoscope with a 75° field of view, a 12-30mm lens depth of field and a 14mm lens focal length; in order to capture the microscopic The picture is high-definition return, and it is also equipped with a high-end custom chip, the image transmission rate is 30fps, the working frequency is 2.40GHz, and the low latency is optimized by 50%. With the visualization App, we can see the high-definition picture in the ear in time, and feel more at ease when we pick out our ears.

In order to let everyone have more ear picking postures, the bebird Note3 wireless smart visual ear wax removal also has a built-in six-axis smart gyroscope. In other words, no matter what angle we clean the ears, we can see the accurate view from the mobile phone. Picture. Of course, if we dig our ears while lying on our side, it is strongly recommended to wear the standard earplugs on the top of the ear wax removal to prevent the ear wax removal from falling and hurting the ear canal.

Experience: see the micro world inside the ear clearly

As a "high-tech" product, bebird Note3 wireless intelligent visual ear wax removal naturally also needs to cooperate with its exclusive "Humming Bird Picking Ear" APP to exert its full strength. After connecting the ear wax removal to the APP in accordance with the official guidelines, you can see the real-time picture taken by the ear wax removal in the APP. 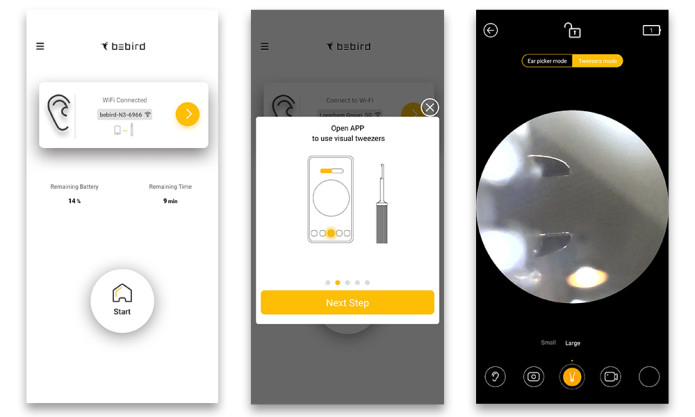 The whole picture is fairly clear, you can intuitively see the microscopic world in the ear, you can clearly see the earwax in the ear, you can easily take it out with an ear spoon. Don’t underestimate this silicone ear spoon. It looks soft, but it’s very soft. It is quite easy to deal with earwax in the ear canal. At the same time, the metal otoscope is kept at 25°C while working, and the handle temperature is 32°C, so the ears will not feel cold even if they are used in the northeast winter.

In addition to digging, the tweezers mode mainly clamps the large particles of cerumen in the ear. The maximum opening and closing degree of the electronic clip is 10.2°. At the same time, the APP also provides two opening and closing angles, and the final tension is 150g.


Prev : Are you still worried that your ears won't be ...

Next : How about bebird smart visual ear cleaner note3?